Raising awareness against counterfeiting in Venice

Tourists who love shopping souvenirs are convenient victims of counterfeit manufacturers. That's why they put warning posters on the streets in Venice. From these posters it is also clear that a lot of the counterfeits are bought by tourists consciously. 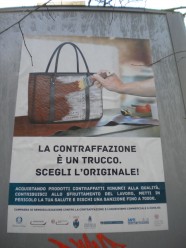 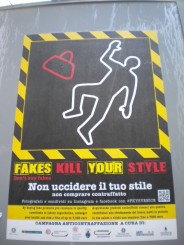 After the opening of the Ambiente Fair in Frankfurt, the Plagiarius awards were handed out. Prices are to highlight the issues of counterfeiting and plagiarism. There is no doubt that the problem is growing. The question is, what can be done about it? It is not just about the theft of ideas and breaching of patent rights, this has also an impact on the economy of companies and even states. A major role in the production and distribution plays globalization and modern technology - Internet markets such as Alibaba.com. Organized crime, which generates large profits from it, plays a major role. There is also a question of health protection when using poor quality materials. Since it was stated that in 2016, the value of confiscated counterfeits at the borders of the European Union reached 670 million Euros, and it was only the tip of the iceberg, then what was the real damage to European producers? Of course, these practices have an impact on employment and state treasuries, too.
The article states that perfumes and cosmetics, consumer electronics, home appliances and dishes, toys, tools, car wheels, as well as medicines, medical equipment and lots of other things, including glass are being counterfeited. It's just all that can generate money!

Is it a fight with counterfeit or advertising?

The brand Diesel did mind its counterfeits, so they came up with their own counterfeit called Deisel. Pointing to the counterfeits of own brands is a reverse way of fighting against counterfeiting. The manufacturer brouhgt this problem up by creating a limited series of counterfeits. This may be the same case of producers who point out that their products are counterfeited because they are of a high quality. In the case of Diesel, this is rather a well thought out marketing move, which is mostly targeted at the collectors of uniques. The problem is that even this limited series will surely be counterfeited in a short time, thus destroying both the intention and the product.